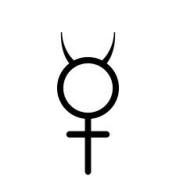 I enter the sphere by passing through the door with the stamped symbol of Mercury at the top, invoking and vibrating the names. Before entering, I give a sign of Shu and make an invoking hexagram of the planet, then I step forward. I enter into the endless white universe, everywhere around me is a milky-yellowish color with sporadical flashes of light, like stars. Here, I shift my consciousness entering into a great Change. The inner voice tells me that it is not yet time to call the guide and instructs me to go ahead alone; it seems to me quite normal, I have an impression that I am on the threshold of the worlds and that I have not yet reached the sphere I intend to explore. The impression of the infinite space embraces me, the pale universe which is everywhere, glittering in its nature, overwhelms me; all that great whiteness is by no means tiresome, and I find it very pleasing to stare into “it”. I enjoyed in that alluring corner of the Universe. After some time I decided to move in the vision, so I chose the 7 stars in front of me and pulled the line of light by joining them, thus creating a large hexagram of Mercury. Then I felt enormous pressure and I was withdrawn with great force forward, from this force I entered completely into Change, and for a moment I thought I would not endure and that I would return. I am moving at a tremendous speed forward, it all takes just a few moments and finally I find myself on a huge, thin plate, sprinkled with black and white squares, floating in dark space. Everywhere around me glitters the stars and distant galaxies, I stand on that plate the size of a football field. In fact, I am standing at the center of the giant chessboard and now I get the impulse from inside that it is time to call the guide, which I do with the name AVTOTAR. Instantly I enter the terrible Change, and I give the sign of Shu to balance “it”, and the sign of Silence in the end. At that moment, while standing in the sign of Harpocrates with closed eyes, I hear a rumble in the distance that is intensifying. Soon it becomes so strong that everything around me was shaking. I opened my eyes and surprisingly I noticed in front of me stampede of thousands of kangaroos. Soon, they passed by me at an enormous speed, a huge chessboard on which I stood trembled so much that I thought it would be halved. I noticed that in stampede there was various other animals jumping; locusts and mouses. I again gave the sign of Silence and completely emptied the content of my mind. After a while I opened my eyes, noticing that the stampede has passed and that peace has prevailed.

The whole this Plane has a very impressive, typically astral landscape with a clear relation between light and shadow. Now I stared at a distance, in the direction where the stampede came, and I noticed a tiny light which slowly pulsates. I went in that direction, but as I did it, the light begins to disappear sporadically. I stopped with the awareness that this was a particular type of puzzle. I retired into the Silence focusing on my Angel. At that moment I heard her voice “around” telling me: “go intermittently, so you can exhibit the perfect balance of contradiction. Think about the nature of this Sphere, observe the shapes around you and act accordingly.” I opened my eyes and watched “around” me. The idea comes through my mind; the beginning of this vision was a white universe, now I am in black, I was on a black and white chessboard, in front of me is the light that sometimes can be seen, sometimes not. Stampede was made from jumping animals, therefore one time in the air, one time on the earth. I observed the light that pulsates and at the moment it appears, I stepped on a white square table; at the moment when it disappears I step on black and at that moment it appears again, so it actually stopped pulsing. As I walk upon black and white squares in the rhythm of its pulsation from before, being consistent with its nature, the light stops blinking and begins to shine continuously, intensifying its intensity as I approach. Soon, I came to the light and now I am standing on the edge of a thin plate, below me is an abyss, dark endless universe, and in front is wonderful light just a few meters distance. I vibrate the name AVTOTAR and the light began to be transformed into the contour of the female Angel. She tells me with a wonderful voice that it is just one half of the name and that I have to say the other to make the full transition. I understand that technically I am at the bridge between Hod and Tiphareth, on the 26th Path, so I pronounce and call the name of my Angel. Now, in front of me, the Angel appears more concrete, the light becomes blue (as it is my Angel’s color), I continue to vibrate these two names while entering the great Change. I noticed that I had received winged sandals of Mercury on my feet; on the other hand, Angel spreads her wings. I hear how she tells me: “for this is He! The Bornless Spirit! having sight in the Feet: Strong, and the Immortal Fire!“. My being is now completely in Change and at that moment I realize that from the beginning it was my Angel playing with me, through the “temptation of the Swords” (Temptation of the Air as an intellect). Change is unrestrainedly overflowing and growing in my Being. I see my Angel, who is now in his true form. Through my Beings radiates such a strong enthusiasm, which grows more and more every moment; at the peak, I make the Sign by which I always come to Her, the winged sandals raise me in the air, as she flies toward me also. As I come to Her, the Change growth to Infinity and “I” step into the “space” of ​​pure LVX. Complete bliss strikes my Being, in the end, she tells me that my Method that I come to Her Knowledge and Conversation is complete and I do not need to change it. This is indeed the method of the Blue Triangle of Holy Hexagram. I am coming out of bliss, completely blissful. I am finishing with a vision. Aumgn.

If you liked this text, feel free to subscribe to my Blog.